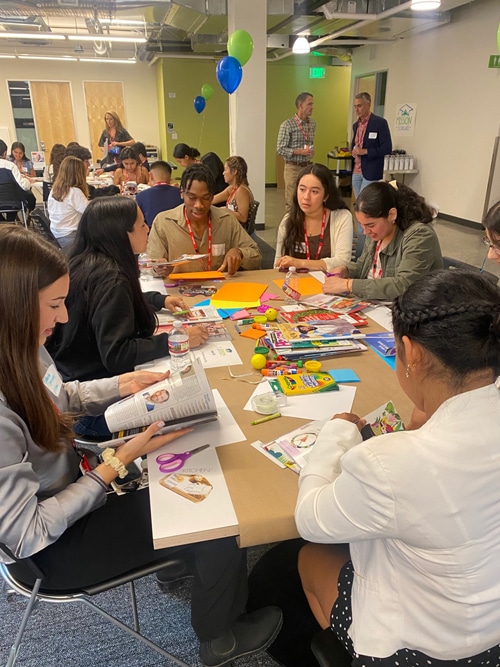 By Melissa DavenportAugust 18, 2022No Comments

Leaders in Transition, a program of the Santa Barbara Education Foundation, helps high-achieving, low-income students get into college and beyond

By Ann Pieramici
“Learning what you don’t want to do,” “saying yes to opportunities” and “trusting yourself” were just a few words of wisdom offered by local business leaders to a group of 25 Mission Scholars who attended the Leaders in Transition kickoff event on July 19.

LIT is a four-year professional development program of Mission Scholars, a program of the Santa Barbara Education Foundation aimed at guiding high-performing, low-income students in getting into college and beyond.

The event was the first to take place in Amazon’s community event space in downtown Santa Barbara.

“Our goal for the evening was for panelists to share their career journeys with our scholars and inspire them to dream big and begin building a concrete plan for how to reach their goals while still in college,” Mission Scholars Executive Director Cassie Lancaster said.

The panelists shared their career pathways, lessons learned from college and work experiences, and defining moments in their journeys.

Davis, who oversees Amazon’s Santa Barbara office, told the group of mostly rising first-year college students, that he tried many different jobs before finding what he enjoyed. From management consulting in the Bay Area to oil and gas consulting in Southeast Asia, he realized that he liked the tech side more than consulting, eventually leading him to join former colleagues in a tech startup in Santa Barbara. That startup — Graphiq (formerly FindTheBest) — was later acquired by Amazon.

“Trusting the people that you work with is critical,” Davis said. “You’re going to spend a lot of time at work, so do something you enjoy — with people you respect and in an environment that allows you to contribute and feel productive.”

Randolph said that he, too, held various jobs — including parking cars — before landing in the software tech world.

“I think a lot of those early lessons of being in a not-so-great job or having an ineffective boss provide valuable perspective and help clarify your values and goals,” he said.

Randolph graduated from college during a recession, joined a tech startup during the dot.com bust and joined AppFolio during a financial crisis.

“The path is not a straight line, and you have to be able to adapt,” he said.

Flexibility is one of the attributes that Randolph said he looks for when hiring new employees. He said depth of related experience is not always necessary.

“One of my best hires was a guy who worked at TGI Fridays in the Dallas-Fort Worth airport,” Randolph said. “He worked hard and knew how to solve problems.”

Bilich agreed that problem-solving skills were instrumental to her success. She started at Amazon, gaining an internship during her first year of college, advising the students to trust themselves and embrace opportunities.

She said it’s important to ask the right questions — something she’s learned by observing others.

“I did not speak Portuguese, nor did I know machine learning or linguistics, yet I helped launch Alexa in Portuguese,” she said. “I did this in large part by asking the right questions.”

Mancuso encouraged the students to “find what fuels your fire.” She worked for years as a registered nurse and spent her vacation time volunteering with medical nonprofit organizations abroad. She eventually decided to flip her life, turning the volunteer vacations into a full-time job. She accepted a position in Panama as executive director of Floating Doctors just before the pandemic sent her back to California.

“I never could have predicted my career path, so you need to leave yourself open to possibilities,” she said. “Life is unpredictable, and sometimes the path you think you want changes.”

It’s advice that Isabella Contreras said she will remember. The San Marcos High School graduate is headed to the University of Pennsylvania in the fall and plans to become a pediatrician, a dream that she said has been made possible with the support of Mission Scholars.

“Mission Scholars has helped me with every single step of the college admissions process, clearly providing information in a way that my family and I understood,” Contreras said.

Her older sister, Estefania, was Mission Scholars’ first student and provided inspiration for starting the nonprofit organization. Both Lancaster and Kim Phillips counseled Estefania, who is now a student at UC Berkeley, and they realized that there were a lot more local students like her who have enormous potential but need assistance.

Wendy Benitez Jaramillo said she never could have imagined going to college until she heard Estefania speak to her class at San Marcos.

“She had a similar background to me, and I thought if she can go to a four-year college then so can I,” Benitez Jaramillo said.

Benitez Jaramillo is headed to New York University’s Stern School of Business in the fall, with a full, four-year scholarship. She will be the first in her family to attend college, sharing that her parents immigrated from Mexico, her mom finishing sixth grade and her dad completing high school.

“Mission Scholars changed my life,” she said. “It’s been the best experience.”

Mission Scholars supports students throughout their college and career journeys, acutely aware that staying in college is just as important as gaining access.

“One in nine first-generation students graduate from college, so we are working closely with this cohort to prepare them for college success, encouraging them to get involved on campus, as well as pairing each student with a trained mentor,” said Katie Kinsella, Mission Scholars’ director of marketing and community relations. “Our LIT program complements these efforts, providing students with financial literacy workshops, mock interviews, resume-writing skills, career panels and more.”

— Ann Pieramici is a Noozhawk contributing writer. She can be reached at [email protected].