By Melissa Davenport May 5, 2020 No Comments 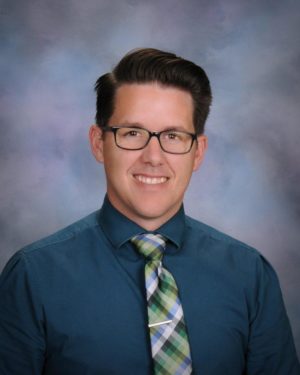 We are pleased to announce the naming of James Koenig as the next principal of Santa Barbara Junior High.

Koenig comes to us by way of Oxnard Union High School District after leading the Student Support Services department for four years. Previously, he was the principal of Gateway Community School and Providence Court’s high school and middle school programs for five years.

He speaks and writes Spanish fluently and has taught English Language Development courses – skills that will serve the campus well as we move to launch our Dual Language Immersion thread at Santa Barbara Junior High next year.

Shawn Carey, Assistant Superintendent of Secondary Education, said she is thrilled to welcome Koenig to the team. “He brings with him a wealth of experience from diverse settings and we look forward to having him serve at the helm of a school as illustrious as Santa Barbara Junior High.”

Koenig said on his first visit, he was struck by the beauty of the historic, 1932 Spanish colonial revival style campus.

“It was amazing. So full of character,” he said. “I feel honored to be the caretaker of a historic landmark that has educated so many generations of students.

Koenig learned to speak and write Spanish fluently as a student studying abroad in Mexico.

“Since I was young, I had wanted to learn Spanish since so many of my closest friends spoke the language,” he said. “As I was completing my bachelor’s degree, I went abroad for a year to study Spanish at the Tec De Monterrey in Queretaro, Mexico. I spent every waking minute speaking, reading, and writing in Spanish. Not only did I learn to speak Spanish, I fell in love with the Mexican culture and its people. I have so many great stories, too many to share at this time, but It was one of the greatest experiences I had as a young man.”

In his free time, Koenig enjoys spending time with his family, RVing, hiking, gardening, volunteering in his community, and traveling.

“I love what I do for a living. I am one of the fortunate ones who wakes up looking forward to going to work,” he said. “I look forward to the opportunity of serving students directly and supporting staff during this new era of education.”

Koenig shared that he’s been married to the “love of his life” for 16 years. Together they have two children, Samantha, 26, and Collin, 13, and a sweet little dog named Happy.