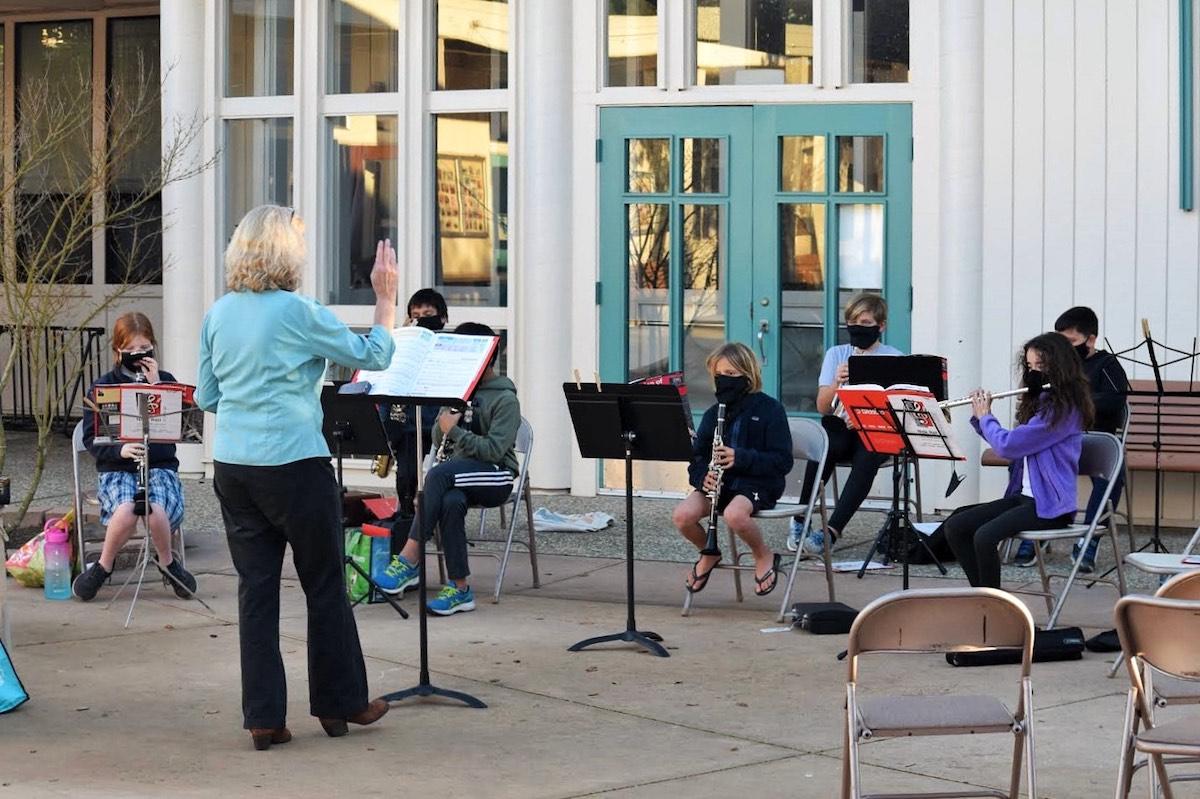 By Melissa DavenportFebruary 15, 2022No Comments

South Coast Youth Band, an after-school music program, has kicked off its first season to give Santa Barbara students the opportunity to keep playing music through the COVID-19 pandemic.

South Coast Youth Band is open to all 4th-6th grade students, in any school from Goleta to Carpinteria, and offers beginner and advanced/intermediate classes. Students are provided with their own instruments to take home, and options include the flute, clarinet, drums, saxophone, trumpet, and trombone. Social distancing is observed with all classes held outdoors, students are not allowed to share instruments, and special masks are provided with small flaps that wearers can open when playing. The program currently has more than 40 students, mostly made up of beginners. Along with receiving basic lessons, practicing simple melodies, and learning to read written notes, students amuse and challenge themselves with games like musical chairs.

South Coast Youth Band currently has six teachers, including Stephen Hughes, a music instructor at La Colina Junior High School for the last eight years. Hughes said Adams and Mathison approached him about joining the group in December 2021, and he saw it as an opportunity to help students. “It’s been really difficult, especially for elementary schools,” Hughes said. Vaccination for students between the ages of 5 and 11 were not approved until late last year, leaving few options for young musical students.

The program was an idea Adams and Mathison had even before the COVID-19 pandemic, initially designed to unite students from across Santa Barbara County and create a larger group to learn and play together. After the pandemic began and Goleta schools no longer offered any band lessons for students, Adams and Mathison officially formed the group and began accepting students this January. “The real catalyst was that students don’t have any opportunities to play, even now,” Adams said. A full session of five months, including instruments, is $100 per student, though scholarships are available for a discounted rate of $50 per student.

A South Coast Youth Band concert is planned for mid-May, and Mathison said the program has the capacity to accommodate at least 100 students. “Programs like these could all shut down if nothing is done,” she said, going on that musical education has great benefits on young minds, building confidence and giving them a chance to develop a true passion. Hughes said music programs like South Coast Youth Band are vital to providing the group settings that younger musicians thrive in. “I love helping students discover things about music,” he said. “They’re just so thrilled to be playing.”