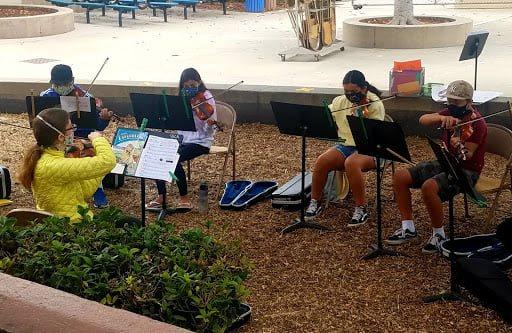 The Sweet Sounds of SBEF Summer!

By Melissa DavenportAugust 24, 2021No Comments

SBEF provided hands-on musical learning opportunities over the summer so that students could keep their skills sharp for the upcoming school year. See what our aspiring musicians were up to! 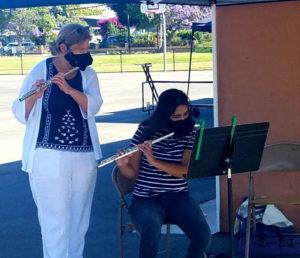 Students work with specialists in preparation for the Summer Pops Concert.

We were thrilled to host the 31st year of Band Camp after taking a year off. This summer, we welcomed a new band camp director, Devon Nelson, who is also the music and band teacher at Goleta Valley Junior High. The camp was held outdoors underneath pop-up tents at La Cumbre Junior High.

With over 70 guests in attendance, the beginning band kicked off the Summer Pops Concert by playing folk songs from around the world, including Naka Naka Hoi and Arroz Con Leche. Following up, the intermediate band took a trip to the movies to play Dragon Slayer and Raider’s March. The advanced band wrapped up the evening with their rendition of The Simpsons theme song by Danny Elfman. Bravo!

Special thanks to Andrew and Mary Jane Cooper, Daniel and Mandy Hochman, The Performing Arts Scholarship Foundation, Paul Mori, and The Perez Family.

For two weeks campers spent their days drumming to their heart’s content and learning to build a foundation for their music education that will last a lifetime. This year Drumline Camp Director Charlie Ortega introduced taiko drumming, and campers performed music from Naruto, a Japanese manga series. The year’s drummers were dedicated, talented, and had a lot of fun! Special thanks to Santa Barbara Bowl Foundation and the Irene F. Anderson Foundation. 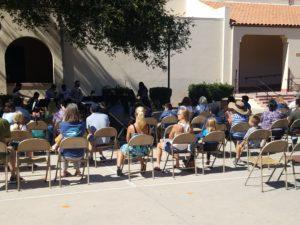 Final concert for the String Camp.

We had the largest summer String Camp yet! Co-directors Devon Nelson and Susannah Hoffman spent two weeks working with campers of all levels. Special guest Moira Bette, a violist with the Hague Philharmonic, visited the camp to perform one of Bach’s cello suites and held a Q&A with campers. In their final camp concert, students played pieces such as Mississippi Reel and The King’s March by K. Clarke. Special thanks to the Towbes Fund for the Performing Arts, the Performing Arts Scholarship Foundation, Patricia Gregory for the Baker Foundation, and Kathy Bette.