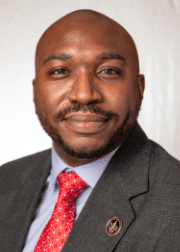 By Melissa DavenportApril 22, 2021No Comments

The Santa Barbara Education Foundation recently elected Warren B. Ritter II to its Board of Directors. Originally from South Carolina, Ritter graduated from Wofford College, a private institution in Spartanburg SC, with a Bachelor of Science degree in Psychology.

Ritter’s professional journey began with his work in South Carolina’s Business Chamber of Commerce, where he developed relationships with government officials in the South Carolina State House. It was here that Ritter worked with the governor’s office, as well as the House and Senate chambers, on policy and legislative reform to have a positive impact on working-class families in areas of agriculture, machinery, and small business. Eventually, Ritter transitioned to the financial services sector, and his success in the banking industry prompted his move to Santa Barbara, California.

In 2018, Ritter shifted from corporate banking to Wealth Management Strategies Insurance and Financial Solutions, where he became a registered representative. Here, Ritter continued to produce solutions that assist individuals with comprehensive problem solving, estate planning, and financial literacy. Ritter believes that addressing these areas of deficiency creates educational opportunities for many marginalized groups of people who normally don’t understand these services.

As a whole, Ritter believes representation is very important and hopes to be a beacon for financial and legislative change so everyone can explore topics unfamiliar to them.

Aside from financial literacy, Ritter’s passion for law and policy has led him to be actively involved in the realm of politics. He is consistently engaging and connecting with representatives at the city, county, state, and federal levels. Ritter’s efforts all fall in line with his belief that real and permanent change happens when policy and legislative processes are changed to reflect the same values that a community and society claim to uphold.

In his free time, Ritter is an avid reader and enjoys both playing basketball and practicing the piano. Ritter also plays an active role in serving and advising the boards/commissions of several non-profits.