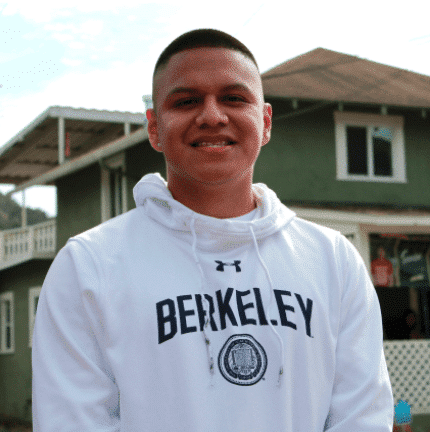 By Melissa DavenportSeptember 7, 2021No Comments

He’s your son, and he has big plans. He wants to attend college, launch a startup, and make it big. He wants to change the world.

He’s always been like this. He always aims high, and he usually succeeds, even when the odds are stacked against him, which they always seem to be. You’re a single mother, and you never went to college yourself, or even considered it an option. Every dollar you earn as an embroiderer is stretched to the breaking point, and half of every dollar your son earns from his after-school job at Panda Express helps pay for rent and groceries.

But the odds don’t seem to faze him. When his peers at school want to learn coding, their parents enroll them in a coding boot camp. When your son wants to learn coding, he collects spare parts, builds his own computer, and devours how-to videos on YouTube. If anyone can make it, he can.

You worry, though. Your son is brilliant, diligent, and driven, but you don’t know how to help him reach his full potential. His wealthier peers have private tutors, private coaches, and private college counselors. They have connections.

Your son has none of these things.

Now imagine a community that sees your son the way you do. Imagine a group of people who sense his potential, and who want him to succeed. They step in, and they give your son the things they give their own kids: the tutors, the counselors, the connections. Your son knows an opportunity when he sees it, so he works harder than ever, and he aims even higher, and he lands a spot at one of the best colleges in the world, UC Berkeley.

Now stop imagining. This kid is not a fictional character. He’s a real person, and his name is Christian Reyes. The community that stepped in to help him isn’t fictional either. It’s Santa Barbara. It’s us.

I first met Christian at Handlebar, not by accident, but by appointment. His counselor had nominated him for the Mission Scholars program, raving about his poise and ambition and intelligence. We had to cram his interview into the hour between school and his shift at Panda Express. I knew within minutes that his counselor was right, and that Christian was special.

I also knew, based on long experience, that he’s not alone. There are many stories like Christian’s in Santa Barbara, and that’s why Mission Scholars exists. Working under the aegis of the Santa Barbara Education Foundation, we seek out extraordinary low-income students who dream of a four-year college education, and we equip them to succeed.

Here’s the rub, though. The battle against inequity doesn’t end with a college acceptance letter. For many low-income students, that’s when the hard part begins. Only 11% of low-income students who make it to college graduate by age 24. Even for students like Christian, who would never, ever consider dropping out, the privileged nature of our top institutions can be daunting and, at times, deeply unfair.

Take internships. While many of his wealthier peers have access to a family network of high-level professionals to help them build their careers during college, Christian does not.

I know — and you know — that summer internships are a critical opportunity to forge connections and open doors for a student’s future. They provide essential experience for the intern, and they are also a key recruitment tool for forward-thinking companies. Many low-income students don’t realize this.

To help drive this point home for our Scholars, we enlist industry leaders like Chris Bruzzo, EVP at Electronic Arts, who also serves as an advisor to Mission Scholars. When he tells our Scholars that summer internships are among the most valuable parts of the college experience and calls them EA’s single best source of new hires, they’re apt to listen.

Christian may not have deep pockets or family connections, but through our program he has access to something better: highly qualified and motivated people from his hometown who want to see him succeed.

For college guidance, we give him his own dedicated college coach, volunteer Erin Morey, a San Marcos High School grad with a Masters in Postsecondary Educational Leadership who is now a Student Advisor at UCSD.

For inspiration, Mission Scholars advisory committee member Estefania Contreras, another SMHS grad and a Berkeley Haas alumna, introduced him to other first-generation Cal grads who, like Christian, studied tech and business as students there.

And when Christian needed that internship after his first year at Cal, our program connected him with local data solutions company Carpe Data, who stepped up to the plate, offering him a paid position for the summer.

Christian is not an isolated case. Our program has many others like him, and many other wonderful volunteers and advisors like Bruzzo, Morey, and Contreras. I love to watch them come together to help make such a profound difference in these students’ lives. I love watching the Santa Barbara community in action.

It’s a special place, and we all know it. It’s not just about the money, either, although that plays a crucial role in our ability to make great things happen. Woven into the fabric of this community is a unique blend of volition and resources, of remarkable goodwill and a capacity to look at a kid like Christian and imagine, just for a moment, that he is our own.

After all, he is.