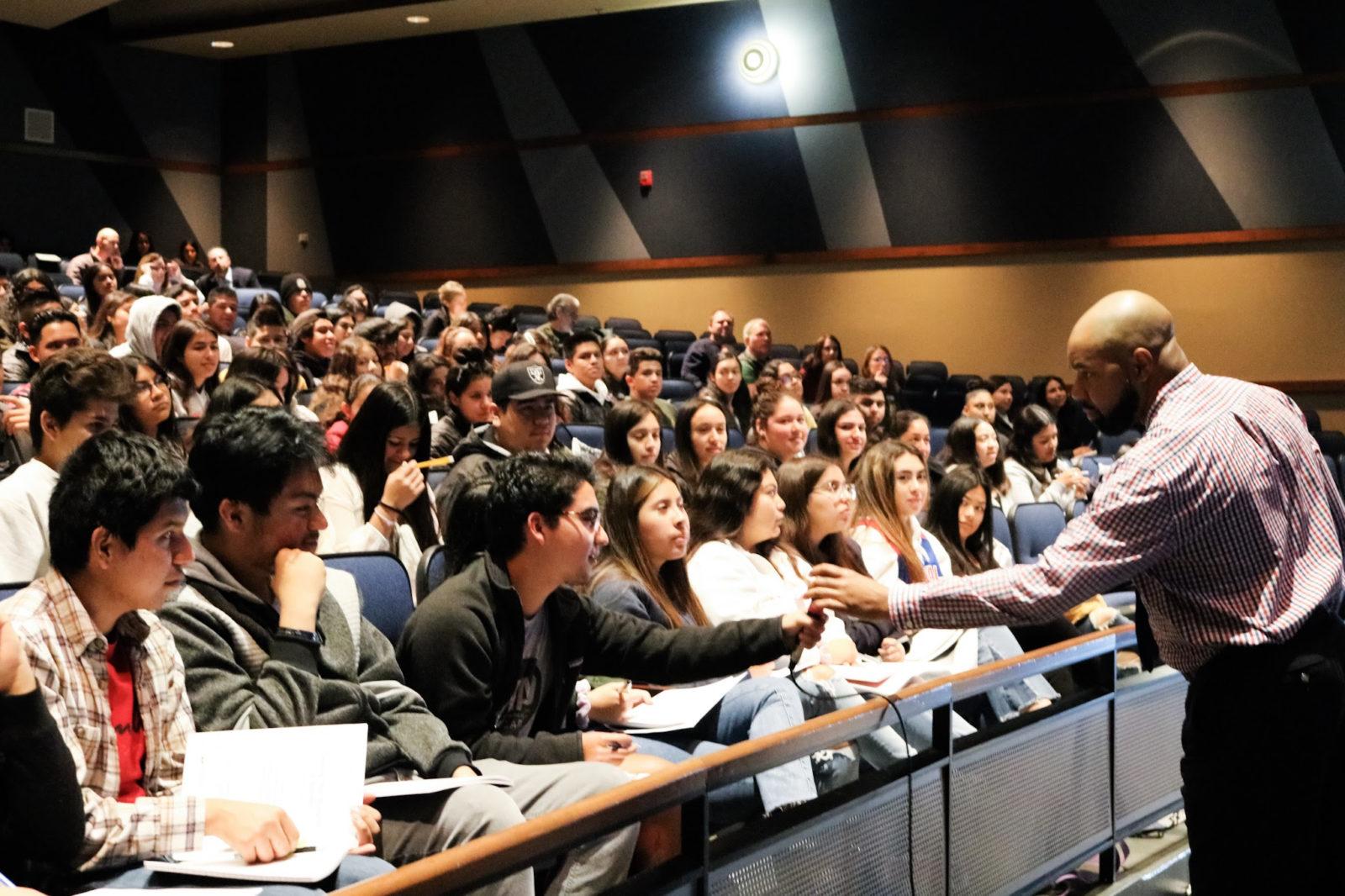 What does it take to be successful in college?

Show up with a notebook and pen. Learn to say “no.” Use the 5-minute rule to fight procrastination. Write down goals and put them in a place you’ll see them before you fall asleep and first-thing when you wake up.

These were just a few of the pearls of wisdom passed on to a group of 200 first-generation, college-bound seniors from Dos Pueblos, Santa Barbara and San Marcos high schools who gathered to create a blueprint for college success with guidance from academic coach LaDonte King.

The event – held Thursday in the Dos Pueblos High School theater – was the first annual Santa Barbara Unified School District PEAC College Readiness Summit, bringing AVID and PEAC students from each campus together for the first time to learn tips, tricks and pitfalls of college life.

King, a UCSB alumni, is the CEO and academic consultant for A-plus Excellence. With 15 years of experience in student affairs at the university level, he has successfully mentored thousands of students toward academic success by helping them develop value disciplines, solid judgment and successful habits like calendaring and networking skills.

“The number one tip to be successful in college? Show up prepared with a notepad and writing tool. Take notes. People are going to be telling you a lot of useful information. And network, build relationships. It’s all about interconnectedness,” he told students during the three-hour lecture and interactive event sponsored by Friends of PEAC. “What works and what doesn’t work for each person is huge in college, because not everybody is the same. But everyone IS responsible for figuring out what works best for them; how to study, how to be successful.”

King asked the students to write down two academic goals, two personal goals and one “elegant dream,” that lofty, long-term goal that likely won’t happen overnight, but is nonetheless something they want to make happen. King advised the students to post these goals near their bed, or somewhere they will see it before they fall asleep, so that their subconscious minds can go to work on figuring out how to actually reach the goals.

“Just by having written down your goals here today, you guys are already lightyears ahead of thousands of actual college students out there,” he said. “That’s how important writing your goals down is.”

The students engaged in a dialogue about weighing decisions around three critical components of college: social life, good grades, and sleep. King told them they will likely encounter conflicts in balancing all three, so will have to make decisions about what to give up.

“It’s really important to say ‘no’ in college to things that are not going to help you accomplish your goals,” he said. “When you’re looking at your goals up on your wall, and you’re seeing them day and night, you should be saying ‘no’ to anything that is not helping you reach them.”

When you get to college, it’s not about making big, drastic decisions, he said. “It’s about already knowing what you have to do and making small adjustments that can have a huge impact on your success. Balancing social life, good grades and enough sleep? You can have all three of these, but it will depend on how you make decisions for yourself.”

Following the event, Santa Barbara High senior Mishelle Carcamo said, “Today I learned a simple way to map out my days. This helped because I have a really hard time with time management.”

Jonathan Flores-Garcia, a senior at Dos Pueblos High School, said a key take-away was to not underestimate the power of networking. “From this summit, I’ve strengthened my idea of networking with a single quote by Mr. King, ‘It’s not who you know, it’s who knows you.’ Hearing this quote from a highly respected and successful presenter planted a new seed to my idea of networking in that I will make myself stand out more during the first impression in order to ensure that I am known by many.”

“Our first-generation college-bound seniors are already ready to go to college thanks to their hard work and the support of awesome programs like AVID and PEAC, but today’s summit ensures they succeed once they get there,” Carey said. “We are so fortunate to have been able to capitalize on the privilege of having Mr. LaDonte King, and the tools and motivation he has provided our students, as a local resource.”

The goal of PEAC and AVID is to increase the academic success of low-income, historically underrepresented students in the Santa Barbara Unified School District.